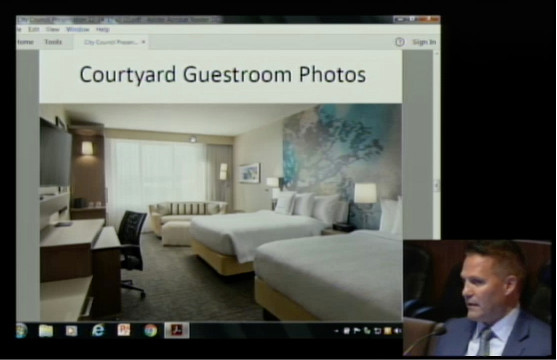 Brad Wagstaff, owner of Mogul Capital, shows what guest rooms will look like inside the modular units that will be used to construct the two hotels.

Prefabricated hotel rooms already outfitted off-site with furniture, carpets, curtains and artwork will be hoisted onto the framework of two Marriott hotels in downtown Hawthorne beginning Monday in a project closely watched by developers across the country.

The $86 million development, just two miles from SpaceX, will feature a Marriott Courtyard with 221 rooms and a 133-room TownePlace Suites extended-stay hotel on an L-shape parcel at the corner of Hawthorne and El Segundo boulevards.

All the rooms and bathrooms already have been built and will simply be stacked up on the site vertically and connected to electric, plumbing and other utility lines. The project is Marriott’s largest prefabricated development yet.